I know a restaurant manager who says,“Mistakes are unacceptable. But I do offer forgiveness.”

That’s certainly one way of looking at it. Not my approach. I read a book that mentioned perfection. The author said it was the denial of humanity. We are all human, but what human can afford to make serious mistakes when they open a new business?

In the  April 2012 issue of Restaurant Business Magazine, and also on their web portal Monkeydish is an article titled, “Mistake Proof Your Opening.” I’m quoted talking about site selection software that used to be the provenance of the chains, and is now available to independent operators. 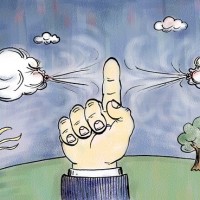 There was a time when independents made a location decision by standing at an intersection, sticking their finger in the air and getting a feel for the wind. It is great that they can now model their successful sites, and compare them to potential sites before making that critical decision to move forward with a new unit. Top restaurant owners know these models are worth the investment.

When site selection software was first developed decades ago, there was a story circulating that, in retrospect, could have been an urban myth. It dealt with a waterfront site on Florida’s Gulf Coast that was rejected by a major multi-concept restaurant chain because there were no rooftops in an acceptable radius to the west. Turns out it was all water. The kinks have been worked out of the software since then.

What other lessons come to mind about avoiding mistakes when opening a new unit?

1. The people who do it right protect themselves by getting the capital they think they need. Then then they get a little more. That is the #1 issue. Lately food truck and pop up restaurateurs are bragging about low startup costs that are the equivalent to a unit’s cash reserve for many operators. That’s great for them – but don’t be tempted. Most of those people would jump at the chance to build a proper restaurant if they had the funding.

2. It is better to adapt to an existing site than have your wish list on design and layout. The best operators realize the value of second generation space for the cost savings it offers. Building plumbing and electrical systems from the ground up to fit your specifications drives your risk and makes target ratios for ROI harder to hit.

3. Uniqueness is key. It is great to have a better burger or steak, but the smartest restaurateurs know that having something diners want that no one in their trade area has is what truly sets them apart.