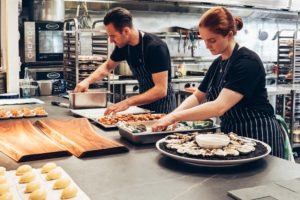 I have never met a restaurateur who does not want people to take more ownership, action, and responsibility.

But I have met plenty who sabotage themselves every day by actively working against that goal.

Many owners of successful independent multi-unit restaurant companies do not yet know how to harness the power of the people they’ve hired.

They don’t know the idea to “never make it about you.”

When owners make it about themselves, they personalize, create dependencies, start a cult, remove people’s power, and pour glue into their machine while people stand by and wait for the next brilliant order, oh wise one.

When they do that, they open up conversation, share power, acknowledge talent, challenge people to think, and make the organization solve its own problems.

And that gives them flexibility and freedom – and makes them happy.

It’s as if your company becomes like an electric car: It makes no noise except, unlike the electric car, it recharges its own batteries.

The Most Tragic Example I Have Seen

I stood off to the side of the dining room watching my client address 30 young managers who were about to start work with me.

This kickoff addressed a major project to build their internal capability and operate in a new and more effective way.

But first, the owner wanted to say something to his management team.

“Thanks to all of our success, I have once again become a millionaire!”

A group of fired-up, happy people remembered that the weather forecast they had checked before they left for the festival had promised sunshine.

Now, though, they noticed the rain was soaking through their clothes – and they wondered why they’d believed that sunny forecast in the first place.

We had a lot to dig out from.

Even with that setback, though, we managed to recover and had a hugely successful initiative that increased the power of these managers and raised sales by seven figures.

My wonderful, successful clients understand a golden rule more important in the restaurant industry than “Do unto others.”

It’s “Never make it about you.”

And, when you catch yourself singing the “me-me-mes,” change your song.

Over to you. What will improve in your organization when you use these words?

What else do you want to improve?